Croquet Canada is the national association which guides the development of the sport within Canada. We are also the conduit through which players can connect to the competitive and social aspects of croquet in other countries around the world.
​​
If you're new to the sport, the best way to start is by visiting one of the many croquet clubs in Canada. Once you've had a chance to try the game, joining Croquet Canada will help you become part of the Canadian and international croquet world. Read here how everyone benefits from your membership.

Click to see a list of croquet tournaments.  Upcoming events are also entered on a calendar that makes researching and registering for tournaments easy. Full details of each tournament can be viewed on this calendar.

To explore this website, click an item of interest from our pull down menu, or if you are viewing from a cell phone or tablet, click on the top left symbol of three vertical lines. This takes you to a menu page. Expand menu items by clicking on the down-arrow opposite it on the right hand side of the page.
Members Login Here

Please apply to represent Canada at the 2023 Women's Golf Croquet World Championship held in West Sussex, England, from Monday August 7th to Monday August 14th. The 56-player event will be held at the Sussex County Croquet Club, the location of the 2019 and recent 2022 GC Worlds.

Please email your interest to: thunderwalkers@hotmail.com 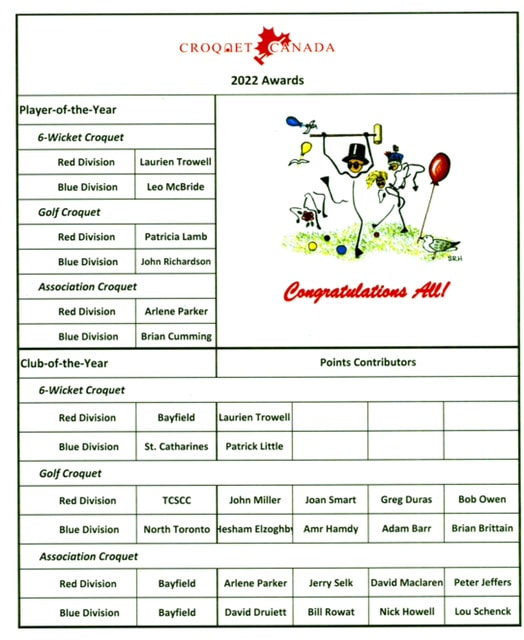 A number of other tournaments took place over the summer including: 14th WCF Golf Croquet World Championship which took place between July 30th and August 4th.

Canadian entrants Hanson Rashad and Hesham ElZoghby encountered tough competition but represented Canada against the best in the world.

​Included in the tournament were winner Mathew Essick and challenger Reg Bamford, Ben Rothman, Stephen Mulliner and other great players.

In addition to the above mentioned tournaments, Montreal hosted the Quebec Open at the Westmount and Mount Royal Clubs.

Winner of the AC tournament at the Quebec Open, Patrick Little, then flew to Egypt for the Egyptian GC Open along with Hesham Elzoghby. They discovered how good the Egyptian players are at Golf Croquet!

To round out the season, the Toronto Cricket Club presented the Falling Leaves Tournament for Intermediate/novice players with the winning trophy going Muskoka Croquet and Bowling Club member Graydon Bell.

Bayfield International Croquet Club hosted 14 amazing golf croquet players from June 4 to June 8, 2022. The weather was variable throughout this four-day tournament. Players arrived from Ontario, North Carolina, Colorado, Minnesota and Australia. Players and Club Members got to know each other during the tournament and at social activities. Club volunteers ensured the tournament and activities were wonderful.

It was a fantastic time!

June 8-12 — CroqCan National AC Championship — Association Croquet in Bayfield, ON.  Limited to 26 entrants; possibly three flights.  On June 8 there will be practice and a reception, followed by tournament play on June 9-11.  June 12 will see semis and finals.  Players must be members of national croquet organizations.  Application deadline May 27.  Contact TM Arlene Parker for info or to enter:  aepparker@gmail.com